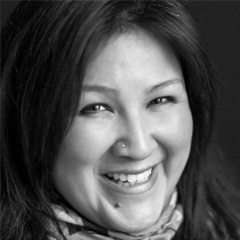 Kim Wheeler is also one the regular hosts of Auntie Up! Kim is also one of the creators behind Auntie Up! And is also working as a producer on the show.

Kim brought positive Indigenous stories to mainstream and Indigenous media since 1993. She has carved out a career as a writer, publicist and producer across a variety of disciplines. Her audio work has been recognized by the New York Festivals, ImagineNative, Indigenous Music Awards and Prix Italia. Currently, Kim works from her treehouse media office with multiple clients in publicity, magazines, film and podcasts.