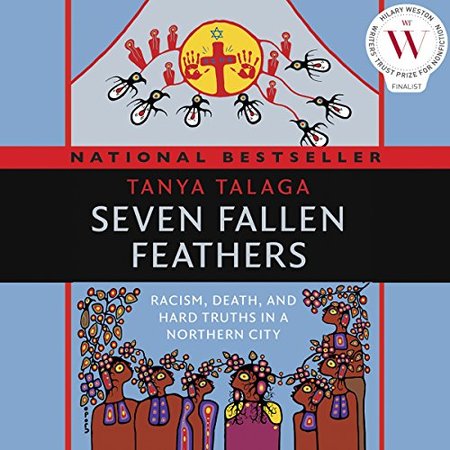 More than a quarter of a century later, from 2000 to 2011, seven Indigenous high school students died in Thunder Bay, Ontario. The seven were hundreds of miles away from their families, forced to leave home and live in a foreign and unwelcoming city. Five were found dead in the rivers surrounding Lake Superior, below a sacred Indigenous site. Jordan Wabasse, a gentle boy and star hockey player, disappeared into the minus twenty degrees Celsius night. The body of celebrated artist Norval Morrisseau’s grandson, Kyle, was pulled from a river, as was Curran Strang’s. Robyn Harper died in her boarding-house hallway and Paul Panacheese inexplicably collapsed on his kitchen floor. Reggie Bushie’s death finally prompted an inquest, seven years after the discovery of Jethro Anderson, the first boy whose body was found in the water.

Using a sweeping narrative focusing on the lives of the students, award-winning investigative journalist Tanya Talaga delves into the history of this small northern city that has come to manifest Canada’s long struggle with human rights violations against Indigenous communities.

A portion of each sale of Seven Fallen Feathers will go to the Dennis Franklin Cromarty School Memorial Fund, set up in 1994 to financially assist Nishnawbe Aski Nation students’ studies in Thunder Bay and at post-secondary institutions.

Purchase your copy at House of Anansi Press.

It’s early April and the 2011 federal election is in full swing. All over Canada, Stephen Harper’s Conservatives are duking it out with Jack Layton’s New Democrats and the struggling Liberals in a bid to win a majority government.

I’m in Thunder Bay, Ontario, to see Stan Beardy, the Nishawbe-Aski Nation’s grand chief, to interview him for a story on why it is indigenous people never seem to vote.

The receptionist at the NAN’s office greets me and ushers me into a large, common meeting room to wait for Stan. Everything in the room is grey — the walls, the tubular plastic tables, the carpets. The only splash of colour is a large white flag with a bear on it that has been tacked to the wall.

The Great White Bear stands in the centre of a red circle, in the middle of the flag. The white bear is the traditional symbol of the life of the North American Indian. The red circle background is symbolic of the Red Man. His feet are standing, planted firmly on the bottom line, representing the Earth while his head touches the top line, symbolic to his relationship to the Great Spirit in the sky. The bear is stretched out, arms and feet open wide, to show he has nothing to hide.

There are circles joining the bear’s rib cage. They are the souls of the people, indigenous songs, and legends. The circles are the ties that bind all the clans together.

These circles also offer protection. Without them, the ribcage would expose the great bear’s beating heart and leave it open to harm.

Stan walks in and greets me warmly, his brown eyes twinkling as he takes a seat.

Stan is pensive, quiet, and patient. He says nothing as he wearily leans back in his chair and waits for me to explain why exactly I flew 2,400 km north from Toronto to see him and talk about the federal election.

I launch into my spiel, trying not to sound like a salesperson or an interloper into his world, someone who kind of belongs here and kind of does not. This is the curse of my mixed blood. I am the daughter of a half-Anish mom and a Polish father.

I ramble off abysmal voting pattern statistics across Canada, while pointing out that in many ridings indigenous people could act as a swing vote, influencing that riding and hence the trajectory of the election.

Stan stares at me impassively. Non-plussed.

So I start firing off some questions.

It doesn’t go well. Every time I try to engage him, asking him about why indigenous people won’t get in the game and vote, he begins talking about the disappearance of fifteen-year-old Jordan Wabasse.

It was a frustrating exchange, like we were speaking two different languages.

“Indigenous voters could influence fifty seats across the country if they got out and voted but they don’t. Why?” I ask.

“Why aren’t you writing a story on Jordan Wabasse? He has been gone seventy-one days now,” replies Stan.

“Stephen Harper has been no friend to indigenous people yet if everyone voted, they could swing the course of this election,” I continue, hoping he’ll bite at the sound of Harper’s name. The man is no friend of the Indians.

“They found a shoe down by the water. Police think it might have been his,” replies Stan.

This went on for a good fifteen minutes. I was annoyed. I knew a missing Grade 9 indigenous student in Thunder Bay would not make news in urban Toronto at Canada’s largest daily newspaper. I could practically see that election bus rolling away without me.

Then I remembered my manners and where I was.

I was sitting with the elected grand chief of 23,000 people and he was clearly trying to tell me something.

I tried a new tactic. I’d ask about Jordan and then I’d swing around and get him to talk about elections.

Then Stan said: “Jordan is the seventh student to go missing or die while at school.”

He then tells me the seven were hundreds of miles away from their home communities and families.

Each was forced to leave their reserve simply because there was no high school for them to attend.

“Going to high school is the right of every Canadian child,” says Stan, adding that these children are no different.”