Spirit to Soar, Mashkawi-manidoo bimaadiziwin is a one-hour documentary inspired by Tanya Talaga’s book, Seven Fallen Feathers. The film looks at how the book came to Talaga, when she travelled to Thunder Bay as a newspaper journalist on a federal election assignment, but discovered instead the story of seven First Nations high school students who had either died or gone missing from 2000 to 2011.

This documentary examines the hard truths around the deaths of the seven students, truths the northern city of Thunder Bay and the country of Canada, have long ignored: Racism kills, especially when it presents itself as indifference.

Spirit to Soar is a closer look at what has happened in the wake of the inquest into the student’s deaths, of how families and communities have struggled to carry on while pursuing justice for their loved ones and equity for First Nations People, and, it looks at Talaga’s own journey of trying to make sense of her role here.

At its heart, this film is a story of the strength and bravery First Nations youth face every single day, when they walk out the front door and head to high school in a country that has tried to erase them. We are still here and thriving. 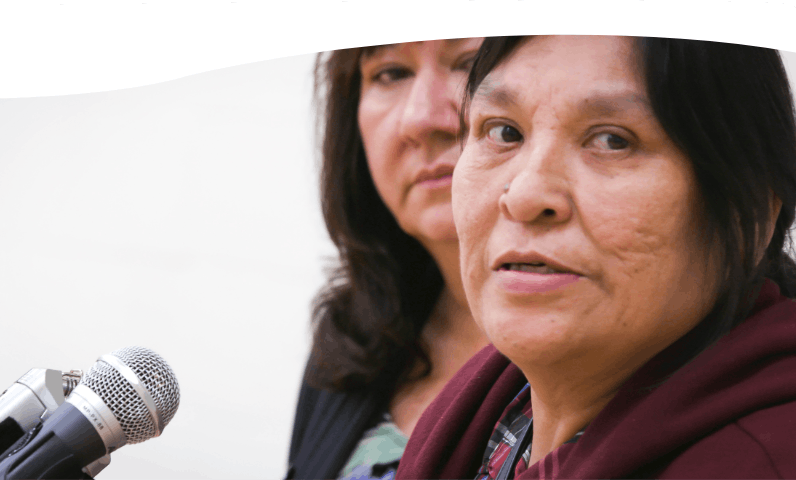 At the inquest into the deaths of the seven First Nations students who died while going to high school in Thunder Bay, educator Norma Kejick, left, was present every day. Time and time again, she heard the seven student’s family’s say no one ever told the mother’s what was happening in the investigations into their children’s deaths. Here, Norma is pictured with Rhoda King at the memorial of Reggie Bushie, 15, one of the students who never made it home.